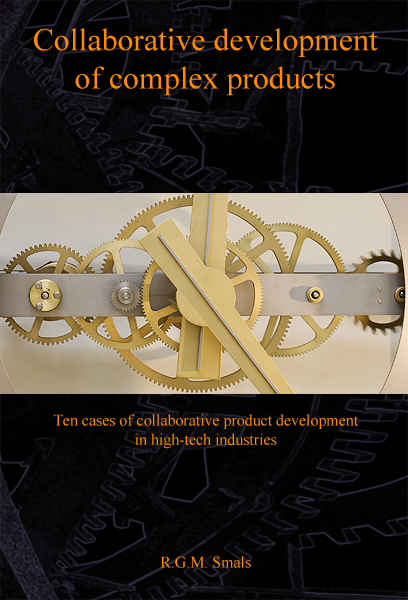 In the period 2007-2011 I did research into the collaboration between Dutch high-tech Original Equipment Manufacturers (OEM’s) and their suppliers. This resulted in the PhD thesis which I successfully defended on 4 July 2012. The thesis can be downloaded from the Radboud Repository (open access). This research was an exploration of the interaction between technology development and commercial aspects of the long-term relationships that are prevalent in the Dutch high-tech industry. I performed dozens of interviews and performed on-site observations at several high-tech OEM’s.

“Supplier Involvement in New Product Development” (SI in NPD) has been researched since the late 1980s. Several archetypes and characteristics of buyer-supplier collaboration have been identified. One of the most popular typologies (or rather: taxonomies, because it descriptively captures a variety that occurs in reality rather than that it prescribes different forms based on a clear theoretical distinction) is that of white-grey-black box, signifying forms of collaboration in which the supplier increasingly accepts responsibility for development activities.

Especially black-box SI in NPD is attractive for both buyers (OEM’s) and suppliers: buyers can delegate a substantial portion of the development work to an external party, freeing resources to focus on their own core competencies and technologies. Suppliers have the opportunity to perform high-value added innovation activities, boosting their financial performance and offering new routes of strategic development.

Past research focused primarily on the (hopefully) positive outcomes and the management of the collaboration on the level of a single development project. The reality of innovation collaboration, however, is all too often one of relationships spanning several decades. In such a long period of time, both technologies and organizations change.

In my thesis, I propose that the form of collaboration depends both on the nature of technology and the availability of capable and willing suppliers. In terms of technology, especially the modularity of the product of the OEM is an important factor that determines if black box SI in NPD is possible. At the same time, the knowledge and competencies of the supplier, but also the attractiveness of the OEM in the eyes of the supplier, determines if a supplier is both capable and willing of performing a substantial part of the development work.

In my thesis, I explored this issue in ten case studies, each one representing the the collaborative development of several consecutive generations of the same module between one OEM and (at least) one supplier. The empirical findings are interpreted in terms of a conceptual framework that is based on three main theoretical perspectives on business-to-business relationships: Transaction Cost Economics, the Relational View and the Resource Based View of the Firm. Together, they can offer an explanation of the potential benefits and rationales of collaboration for both the buyer and the supplier, and for the decisions in managing the co-development on the project level.

The conclusions of this research include that the delegation of innovation activities to supply chain partners is a strategic decision that should be taken in the light of an OEM’s value proposition to its customers and its own core competencies. At the same time, suppliers are posed with the challenge of deciding on their own strategic development: are they willing to become high-value added suppliers that not only manufacture products, but also take responsibility for translating functional requirements into a working design that can be manufactured at the required costs and quality? The success of SI in NPD depends on the long-term commitment of both parties to the effort. This requires a clear view on the added value of the endeavor for all parties involved, in-depth knowledge of existing and nascent technologies of both buyer and supplier, and insight into the organizational and commercial aspects of the other party.

Apart from the PhD thesis linked to above, findings of this research were also presented at several international conference and in a 2012 Industrial Marketing Management publication.